My ghost story (I was going to wait 'til Halloween, but I'm kind of short on ideas lately): 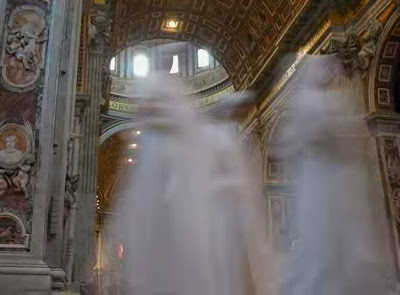 There's a church I used to attend in South Wellfleet, Mass., right on the corner of Route 6 and Lieutenant Island Road, across from Rookies restaurant. It's not an old church, it was built sometime around 1970. The basement of the building is a huge banquet hall, with a large kitchen off to the side, with several small classrooms at the other end of the building. One day I was sitting upstairs in the church by myself, and I started to hear talking downstairs. It was muffled, and i couldn't really make out what was being said, but there was also laughter and the clanking of dishes, the sound of people walking around, etc. It got louder and louder, but I still couldn't make out what was being said, so I decided to go down and see who was there. I assumed some of the ladies of the church were cleaning up in the kitchen.
I got downstairs and nobody was there. Dead quiet. Not a sound. the voices stopped as soon as I reached the bottom of the stairs, like I just walked in on a conversation they didn't want me to hear.
I went back upstairs. A few minutes later it started again. It got louder, and louder, and louder, and louder, so I went back down, thinking I had just missed them.
Nothing.
Whenever I'd go back upstairs it would start, and whenever I went downstairs it would stop.
It happened several times, and on several different occasions. I thought it was just me, but finally i asked somebody about it, and they experienced the same thing. Several people had the experience, not just me. And whenever I was downstairs in the dark, I could sense I was not alone. I could literally feel it. There are several classrooms with windows, but they always keep the doors shut, so in the hall it's pitch black.
It's really creepy.
Posted by joe at 9/19/2009 01:21:00 PM